Are You Intelligent? Or Just Smart?

I got called “smart” a lot at school.  It was not usually meant as a compliment, nor as an insult.  It was just the way it was.

My father often commented on how much smarter I was at my age than he was.  I liked it when he said that.  Unfortunately it really didn’t mean as much as what you might think.

Being smart is not hard.  Being smart means two things: having a decent memory, and being able to manipulate symbols in a culturally useful way.  Both of these things are relatively easy to practice.

To improve memory one must practice remembering things: facts, trivia, poems, songs, or, as in my childhood experience, bible verses.  To manipulate symbols effectively, one must read, write and speak often enough with appropriate feedback to ingrain the symbols.

Most children without learning difficulties or brain damage are smart.  My boys can rattle off more dinosaur names than David Attenborough.  They can memorise song lyrics after one or two listens.  My five year old can write his name with ease.  They are classically smart for their age, and their grandmother (to my disdain) reminds them to the point of ridiculousness.

But would you call them intelligent?

I have spent a lot of time trying to define what I mean by intelligence.  The current dictionary definitions do not capture the specificity of it.  They tend to list popular meanings instead.

(1) : the ability to learn or understand or to deal with new or trying situations :reason; also : the skilled use of reason(2) : the ability to apply knowledge to manipulate one’s environment or to think abstractly as measured by objective criteria (as tests)

The closest they come to my definition is “aptitude in grasping relationships”.

The ability to correlate at least two previously unconnected points.

Timothy Leary described the growth of a child’s symbol manipulation skills as laryngeal-manual development, referring to the use of the voice and the hands as the primary conductors of symbolism.  Many people use the word intelligence to describe how well a person uses these muscles.

How well a person communicates will certainly limit the quality of the information being transmitted.   However, it’s fairly rare that an adult human encounters a situation where he requires intelligence.

Memory and rote learning are usually enough to get us through the day.  Most workplaces these days are the homes of automatons, with systems inserted to prevent thinking.  Schools reward high levels of smartness, but don’t often seem to know how to improve intelligence.

True intelligence on the other hand describes the ability to take two ideas or actions, and put them together in a way previously unknown to you.  It is an act of creation, and is usually accompanied by a small “aha!” moment.

What are some examples of intelligent action?

When playing football, you keep putting the ball over the crossbar when taking shots on goal.  You find that your successful shots depend on you placing your left foot next to the ball, and keeping your right foot toe down.  These two bodily movements have now been correlated with successful goal-shooting.  This can be committed to memory to consistently improve your shot.

Einstein drew new correlations between mass and energy, space and time.  He literally imagined himself on a train approaching the speed of light.  This metaphor brought so many previously unconnected points of data together that it changed the future for all of us.

I got so excited!… until I saw Technically Viable

C.L. Sholes found a relationship between the arrangement of letters and typing speed on mechanical typewriters, thus creating the QWERTY typewriter.

Then Shai Coleman decided that QWERTY didn’t make any sense in the modern era, as there were no more mechanical typewriter arms to get mangled.  He created Colemak and made typing

He recognised the redundancy of QWERTY and created a new interface to reflect that realisation.

Intelligence is a skill.  Like all skills, we can improve our intelligence through improving the quality and increasing the quantity of the experiences we have.

These experiences create patterns from which future choices can be made, known as engrams.

Engrams are a hypothetical means by which memory traces are stored as biophysical or biochemical changes in the brain (and other neural tissue) in response to external stimuli.

In other words, engrams are patterns that have been wired into your biology through consistent use.
Why are old men often so creative when it comes to problem solving?  They have a huge number of engrams to draw upon to derive solutions.  Although a hypothetical idea, I find engrams a useful metaphor for increasing intelligence.

Rock climbing has a number of different styles, one of which is crack climbing, as above.  You may notice she has her hands in a crack. Now, let’s say she has climbed several routes like the one above.  Perhaps this one: 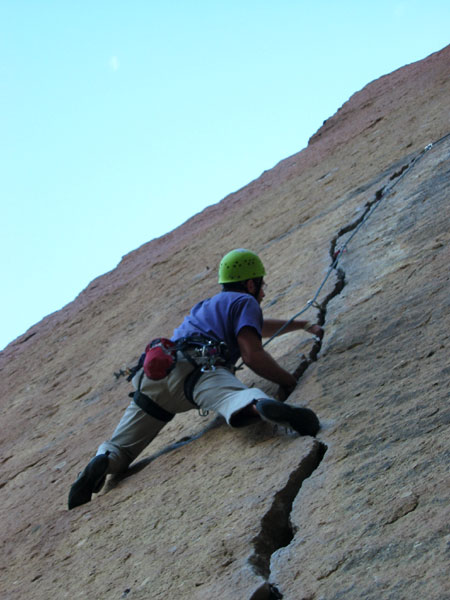 You can see that all the routes are different, but they all have similarities too; they are all on rock, they all have cracks to climb, they are mostly vertical.  Our climber has built up a decent skill set on cracks; a set of engrams she can call upon whenever she encounters cracks.  The more engrams she has to call upon, the more likely her chance of success on any given crack climb. Our climber then encounters this (horrors!):

Although she has never done a crack route like this before, her experience and engrams will allow her to make intelligent choices and correlations between her past and present climbs.  This increases her chances of success many times.

So too with intelligence.  The more problems you can solve, the more experience you will gain, and the more engrams you will develop.  All this experience will give you a wider range of options when it comes to your solution. At heart it’s the need for a successful result that drives intelligence.

To improve intelligence you must search out problems that need solutions and goals that need achieving, then find the points to correlate for a solution. Over time you will notice increased correlations and realisations.

Only then will you find an appropriately awesome ending for this post.

Bored Men Make Me Puke In My Mouth

No Booze, Phones or Permission… #NoNothingNovember Here We Go